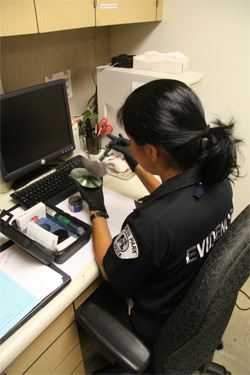 Property and Evidence Unit is responsible for maintaining the integrity of evidence and chain of custody of all property that comes into their possession in accordance with state laws, city ordinances, and departmental policies and procedures. The primary duty of the Police Technician is to log, classify, store, submit evidence to the crime laboratory, dispense, destroy and release property/evidence to its rightful owner, for court presentation and/or for destruction or auction.

Other responsibilities of this unit include responding to crime scenes, taking photographs, collecting and preserving physical and biological evidence, and lifting fingerprints. Entry to the property rooms is limited to authorized personnel only in order to maintain the integrity of the property and evidence.

Evidence is any property related to a crime or incident that may implicate or vindicate a person from a criminal charge. Items will be held until the case is adjudicated and the Detective handling your case has approved the release of your property. If a special circumstance or need occurs, contact the detective handling the case. You can contact the Detective Bureau Secretary at 626-960-1955, ext. 429. Release items taken as evidence can only be released with the investigating detective's approval.

Items will be held for 60 days awaiting pickup by the owner. Unclaimed property will be destroyed or auctioned per department policy.

If you are unable to pick up your property, a representative may pick up the property on your behalf, if they bring a release letter with your signature stating their full name and authorizing them to receive your property.

Items will be held for 90 days. If no owner can be located the unclaimed property will be destroyed or auctioned per department policy. If the finder wishes to claim ownership, and if no owner can be found, they must state so at the time the property is turned over to the police department. Found guns can not be released.

Procedures to Obtain a Firearm from Police Custody

Before any firearm is released, approval must be obtained from the investigating detective handling your case before it can be released to you. Any person wishing to retrieve their firearm must submit a Law Enforcement Gun Release Application to the Department of Justice (DOJ). Once a DOJ clearance letter is received, you must make an appointment with the Police Technician to pick up the firearm within 30 days of the date on the letter received from DOJ.

A release application can be obtained at the police station. Since 2005 mandated by California Assembly Bill (AB) 2431, a $50 " weapon storage" fee will be charged by the Baldwin Park Police Department for each weapon released to an owner or gun dealer. There will be no fee charged to reclaim a recovered firearm if the gun was reported stolen, within five days of theft.

How to Locate Your Property

View All
/FAQ.aspx
File A Report
Notify Me
Online Services
Commend An Employee
Have A Complaint?
Forms & Documents
Alerts
Government Websites by CivicPlus®
[]